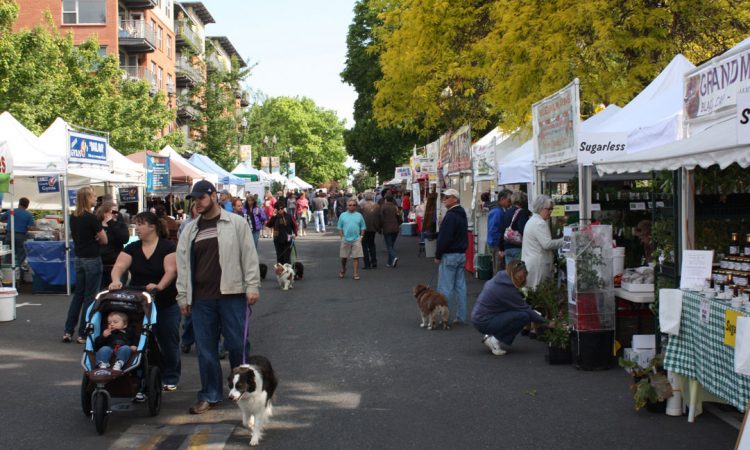 We did it!  Our very first show took place on August 4th at the Vancouver Farmers Market and it was a rousing success!  We had some great crowd reaction, good tips, and Jim saw an old friend who dropped by completely out of the blue.

Any conscientious performers are always going to be a little nervous before a show, and with this being our first gig as a quartet, everyone was feeling it a bit.  But there was no cause for worry, everything went great!  The sound was good, the band was good, and the people were good.  And no tomatoes or other produce were thrown at the band.  That counts as a success!

We got a lesson in why ‘standards’ are called that.  The 3 songs we got the biggest reaction to were “Fly Me to the Moon”, “Pennies From Heaven”, and “All of Me”.  Besides being crowd favorites, we are learning to appreciate the jazz approach; where you take a song and explore it in whatever direction you want!  This is a lot harder to do with songs from other genres, where the original recorded version becomes so ingrained into the public’s consciousness that they can’t tolerate any variation.  For a story about this very concept, listen to this episode of Jim’s podcast.

We’re working hard and really looking forward to our next (public) gig on September 22nd. Come out and hear some new tunes! Well, new to us anyway…

Looking forward to our gig on Wednesday at Kenton Farmers Market! Come join us for great music on a great fall day! ow.ly/xJ8550wnKFF pic.twitter.com/T8BA…

Adam taking a selfie break during our first rehearsal as a septet. Lots more music, photos, videos, and fun to come! pic.twitter.com/LkpE…