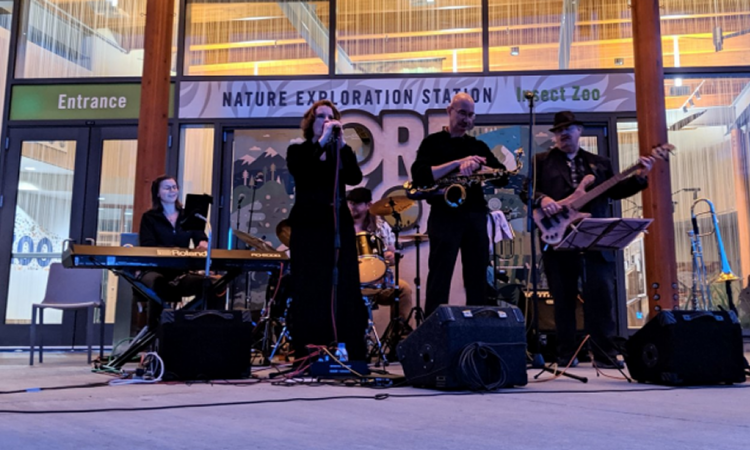 Leaving the Nest: Our First Tour

From sea to shining…elephants?  It wasn’t the world & elsewhere, it wasn’t even to the Isle of Lucy.  But a tour’s a tour, and we did it!  Early June was a busy time for us, including several firsts for the band.

First First: Formal at the Beach

We played a black-tie affair for the annual convention of Oregon Freemasons, held this year in Seaside.  It was our first convention gig, our first formal-dress gig, and our first gig outside the greater Portland area.

We arranged our schedules to allow us time to enjoy the beach and hang out as a band.  The beach part was nice, although it was foggy & rainy that day–a normal June day on the Oregon coast!  Hanging out was great, and it was a treat to have plenty of time before the show to relax and prepare in a leisurely fashion.

Speaking of fashion, as this was a formal event we all got dressed up.  Adam & Jim wore tuxedos, while Greta & Olivia wore some stunning formal dresses.  Next time, maybe we’ll reverse that and see if anyone notices.  It was a lot of fun spiffing up, although we are all still learning how to perform in formal wear.  More practice will help, and we are looking forward to more formal events in the future.

We did two nights at the Oregon Zoo for their  “Zoo Brew” beer & cider festival later in the week, which was a great place to debut Jeff’s talents.  His various horn sounds and his musical knowledge have greatly improved our sound and have enabled us to get more mileage out of our material.  His three purple horns are also a fantastic addition to our stage act!

Third First: It’s All Happening at the Zoo

This was our first gig at the Oregon Zoo, and it was a blast!  We met some great people, and the zoo’s event staff were very helpful.  We want to send a special squawk-out to all the ‘zoomer’ (golf cart) drivers who helped all the bands & vendors haul their stuff around.

It was also a rare treat to not haul gear back & forth for a night.  While we had to move things out of a public space, we didn’t have to put them back into cars and then take them all out again.  We all agree that this is something we’d like to get used to, but we understand that touring means a lot of packing & unpacking.  It’s a small price to pay to get paid to play music.

We were able to set up a camera to capture the band’s performance.  This was really more of an experiment, but all things considered it turned out well and gave us some good ideas for future videos, both live and in-studio.  These also gave us something to put up on our new YouTube channel!  Here’s one of them now…

Fifth First: The Art of Lighting Without Lighting

Bonus points! Do you know the inspiration for the above title? Email us with your guess and if you’re right, you’ll receive a special surprise!

Our venue at the zoo was interesting in that it was lit for the building to be seen, but not so much to illuminate anything around it.  This made for some great night-time photos with interesting colors!

Combining all these elements produced a photo that looks like the band is lit by stage lighting, but the cool thing is that we’re not.  We all especially like the purple tones that natural twilight gave to the scene.  Adding this to the above building being known as “the NEST” along with Jeff’s three purple horns, we like to believe that this is yet another sign that we’re destined to be together as a band.  Sometimes, you just have to believe in miracles!

RT @neon_husky Got free time? Listen local. Search in your area for a radio station that plays music by local artists. If there isn't one, find a station that is run locally--not by a huge corporation. Check for low power (LP) stations too. Feed your ears! #ThriveByThinking

RT @neon_husky Got free time? Share some culture. Join or form a book, video, or music club where everyone tries out the same item, then discuss your impressions of it. Not only will this broaden your world, but it might help you improve your social skills. #ThriveByThinking

RT @TuxCatMusic The first part in our new artist development series. Can't be in a band without joining one! ow.ly/sPwz50yX4cb

RT @neon_husky Got free time? Bake something. Make your whole house smell yummy with fresh-baked whatever. Use a mix if you need to, or see how far you can get baking from scratch. While you enjoy your baked goods, think about how many people made them possible. We all help. #ThinkToThrive